Here are the most popular Far Cry 5 cheats and modes for you to upgrade your gameplay and gaming experience of Far Cry 5! 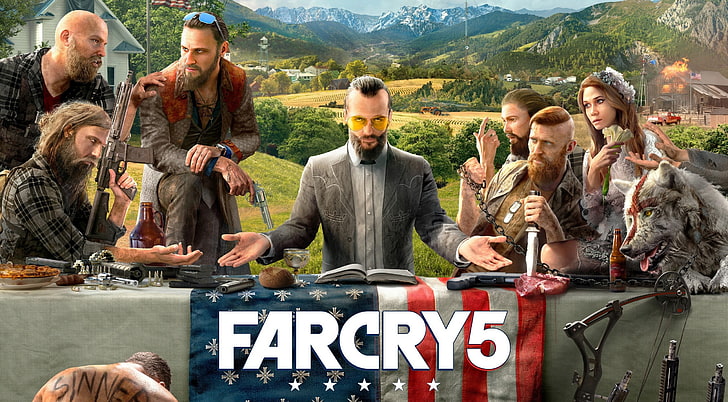 Hey there, fellow gamers! We are here with a very useful, information-filled article for you on Far Cry 5 Cheats! Far Cry is, without a doubt, one of the best and most recognizable IPs in gaming.

Each game in the series delivers on its promises – superb open-world design, a compelling narrative, and heart-pounding action gameplay. In this aspect, the latest entry in the series is genuinely exceptional, exhibiting all of Ubisoft’s best features.

How to beat the carrier’s end in the most straightforward method possible?

Rather than shooting everyone on the carrier, shoot the gunner on the helicopter and leap into the water at the end. Swim low and ensure that you capture the gunner.

You will witness his plummet from the chopper. If you don’t, he’ll shoot you while you’re submerged. Then go to the location where the carrier was cracked, shoot off the raft boat’s chains, check above you for it, and swim away.

Using the –DEVMODE command line parameter, start the game in developer mode. One way to achieve it is to create a shortcut on your desktop to play, by right-clicking it, and then adjusting the shortcut’s attributes.

Then, before the final “, type -DEVMODE and click Ok. After that, press one of the keys and activate the corresponding cheat function while the game is running. Please keep in mind that all levels will be unlocked while in development mode.

It’s a foregone conclusion that the first cheat that any player will seek in a video game is God Mode, which enables them to tank through foes and blast past obstacles carelessly due to their invulnerability.

There are three distinct methods for allowing this trick in the game. The first is more of a technical god mode, in which the user can disable AI damage entirely by altering the game rules. Lua file’s hex code settings.

The second method includes the –DEVMODE commands line parameter in the game itself – preferably via a game shortcut. This enables — appropriately — Developer Mode, which allows users to trigger God Mode by using the Backspace key.

The third — and by far the most straightforward — method of unlocking God Mode is to use the (tilde) button to open the in-game console and type the command god mode count=1.

Acquire All Weapons In The Game:

One of the more straightforward tricks in the game grants the player complete access to all weapons in the game. There are two methods for activating this hack.

To obtain these weapons, gamers must first activate the dependable Developer Mode, after which they must press the letter P to replenish their arsenal entirely.

The second way accomplishes the same by using the console command to give all weapons=1.

Increase Ammunition For All Weapons:

Another effective exploit that enables gamers to go utterly insane during a shootout is quickly increasing the ammunition for all of their weapons. There are three possible approaches to this.

By navigating to the FCData folder and selecting ScriptsEntitiesWeapons, the player can modify the hex code for any weapon in the game and increase its clip size.

To obtain ammunition for all weapons, the final method is to open the console with (tilde) and type the command give all ammo=1.

Another great trick in Far Cry 5 is increasing or decreasing the game’s speed via the Developer Mode. It’s a cheat that is certain to have some strange and amusing impacts on the gameplay.

After activating Developer Mode, the player can change the game’s speed by pressing the following keys.

So, that was all the information on Far Cry 5 Cheats and various other codes & modes to help you excel in the game. Hope you found this helpful. Share your feedback with us in the comments down below.