How To Cross Invisible Bridge At Heretical Rise in Elden Ring?

If you have discovered the unseen Invisible Bridge at Heretical Rise, here is how you can cross it and get through! 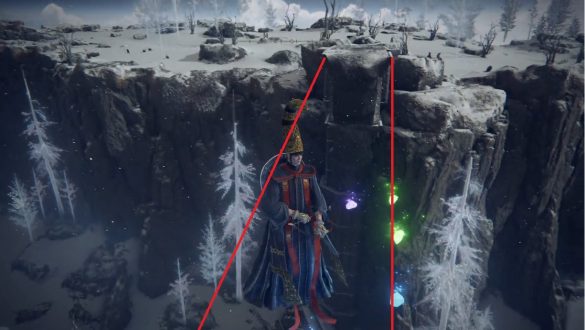 Hi guys! And welcome back to another interesting blog about Elden Ring. And today, we are here to discuss how you can Cross Invisible Bridge at Heretical Rise in Elden Ring? The popularity of this game has scored it among the top-ranked games in the gaming community. It is an amazing action-filled role-playing game with a huge room to express your creativity.

Elden Ring is a game of quests, puzzles, and wars. One factor that makes it interesting is that it is full of mind-bending puzzles. One such puzzle is centered around the Heretical Rise location. The Heretical Rise location can be found just around the west of a large frozen lake in Mountaintops of the Giants region. This region won’t just let you go, there are hurdles to go through- a seal. In order to go past the seal in Elden Ring, gamers must traverse something unseen. And, we’ll tell you exactly how it is done.

To start solving the Heretical Rise puzzle one needs to get to the other side of the ravine that could be found on the North of the tower. Once you get to that side, look for a small portion of the bridge extending over the ravine and towards Heretical Rise. To reach its exact location, spot the Freezing Lake Site of Grace in Elden Ring.

Upon reaching the relevant bridge section, players should stand on it and start their journey on an invisible pathway over the ravine in the direction of the Heretical Rise.  This is because of the break in the path as you get closer to the structure. Now is the time to ascend an invisible ramp on the left to curve back to the tower.

In order to locate this ramp, the player should keep moving slowly on the straight portion of the pathway using Elden Ring Sorceries, Rainbow Stones, or other tools to make sure that they are on the right track. While tracking your path, keep an open eye towards your left to spot a faint white mist before getting on top of the tree, which marks the curving ramp. This is what you need to follow in order to get to the Heretical Rise.

Once you have made it to the Heretical Rise, dispatch the Elden Ring enemy inside, get to the eastern stairs, and use the lift. Fans will now ascend the stairs on the exterior of the tower while taking care of the foes. Finally, get a chance to loot the chest in the room at the top, containing Founding Rain of Stars, legendary sorcery that releases a downpour of star rain.

So, guys, this is it for today’s blog. I hope this helps you ace your game. Let us know in the comments section below that whether or not you were able to spot the curved ramp. Until next time, guys!